The differences are as follows:

Overall, for a given set of spectra, the XCorr scores computed by Comet and by Tide should be quite similar to one another, assuming that the various search parameters are set similarly between the two algorithms. Below is a table summarizing the correspondence between the two sets of parameters. The specified values will yield nearly identical XCorr scores from the two search engines.

Here is a scatter plot of XCorr scores from a search run with the parameters listed above: 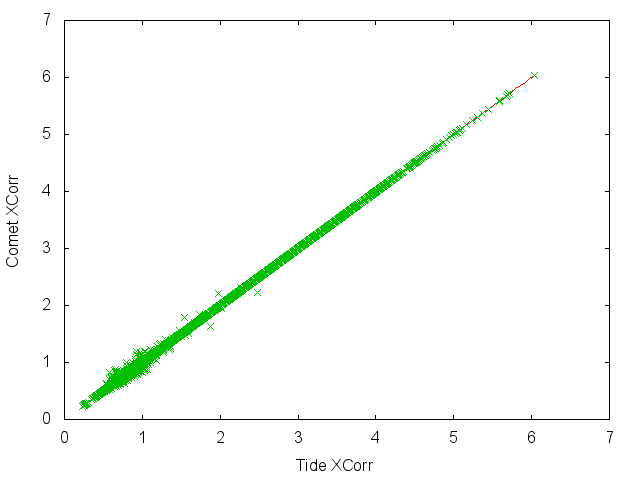 Crux is written in C++, so in principle it should work on virtually any modern operating system. We provide pre-compiled binaries for Linux, MacOS and Windows.

The XCorr score is essentially a dot product between a preprocessed form of the observed spectrum and the theoretical spectrum derived from the candidate peptide. In order to compute this dot product, the masses of the fragments in both spectra are assigned to discrete mass bins. This can be viewed as a form of rounding, but with more control over the discrete masses. Two parameters, mz-bin-width and mz-bin-offset, control the size and location of the bins, and are used to convert fragment masses according to this formula:

The default values bin-width=1.0005079 and bin-offset=0.40 are suitable for most low-resolution datasets.

The options enzyme (for tide-index) and search_enzyme_number (for comet) define the enzymatic cleavage rules. When enzyme=no-enzyme or search_enzyme_number=0, then any subsequence of a protein may be considered as a candidate peptide. For other values of these parameters, the residues at the termini of the protein subsequence must follow specific rules. For example, trypsin requires that the preceeding residue must be an R or K and the following residue may not be a P.

When digestion=full-digest (for tide-index) or num_enzyme_termini=2 (for comet), then these rules must be true at both ends of the peptide. When it is digestion=partial-digest or num_enzyme_termini=1, then the rules must be true at at least one of the ends. The missed-cleavages and allowed_missed_cleavages parameters control the maximum number of cleavage sites that may lie within the peptide sequence.

Candidate peptides are those whose mass falls within the defined window. The peptide mass is computed as the sum of the average amino acid masses plus 18 Da for the terminal OH group. Candidate peptides can also be constrained by minimum and maximum allowed length.

Although the syntax for specifying amino acid modifications differs between Comet and Tide, the logic of how those modifications are applied is similar.

Note that Comet allows slightly more flexibility than Tide in specifying different types of modifications. Terminal modifications in Comet can be specified to occur within a range of amino acids near the terminus. Also, via the "binary set" flag, a modification can be required to appear on all or none of the residues in a given peptide.

Reducing the precursor mass tolerance has two main benefits. One is reduced search time, and the other is improved statistical power to detect matches. With a smaller window, fewer candidates are tested against a spectrum. As a result, the statistical confidence measure calculated after multiple testing correction will be more significant. Of course, the flipside is that if you make the precursor window too small, then you may end up throwing out correct identifications. Control over the size of the window is provided by the using the precursor-window and precursor-window-type options.

In combination with GNU parallel, parallelization of Crux can be achieved rather painlessly. For example, to run tide-search on a set of spectrum files, you can just get your spectra files into a filelist:

Then, with a bit of bash magic, run parallel as follows (assuming there are 100 files in file.list):

Thanks to Ben Temperton for this answer.

There are a number of different SILAC reagents with a ~4 Da modification (based on combinations of C13 and N15), each with different sites of specificity. The example below is for the 15N(4) reagent applied to R residues. You should adjust the modification mass and residue(s) applied to as necessary.

Note that, in the example above, Comet operates in “binary” mode, which means that it only considers peptides in which all or none of the lysine residues are light/heavy. Tide does not support binary mode searching, so it will consider all peptides with up to 3 (in the above specification) heavy lysines.

To search just the heavy labeled sample, you can apply a static modification:

This example uses the 13C(6) SILAC mass, assuming it is applied to both K and R. You should adjust as necessary. There is at least one more SILAC reagent with ~6 Da modification mass and different residue specificity: 13C(5) 15N(1)

To perform a mixed light/heavy search using a variable modification:

To search just the heavy labeled sample, you can apply a static modification:

The example below is for 13C(6) 15N(2) on K residues. Variable modification search:

The N15 labeling adds 0.997035 mass difference for every nitrogen in each amino acid. So for a 100% N15 analysis, specify a static modification (between 1 and 4) to every amino acid residue, like this:

Patches implementing new features can be emailed to the development team at crux-support@uw.edu for review and inclusion in subsequent releases of Crux.

Thin air. The name is not an acronym or a reference to anything in particular.